The Truth About NFC Cards – Are They Legal?

Don’t Get Left Behind!

Get a free Zapped Digital Business Card and upgrade to a Zapped NFC Card or Tag today.

If you’ve been wondering whether NFC cards are legal, wonder no more! We’re here to give you the lowdown on this hot topic.

NFC cards are a type of smart card that uses radio frequency identification (RFID) technology to communicate with NFC-enabled devices.

NFC cards are used in a variety of applications, including contactless payments, access control, and public transit.

NFC cards are legal in most jurisdictions, but there may be some restrictions on their use. For example, some jurisdictions may require that NFC-enabled devices be registered with the government.

In addition, NFC cards may be subject to other laws and regulations, such as those governing electronic transactions or data protection.

What are NFC Cards?

NFC cards are cards that have a built-in NFC chip. NFC stands for “near field communication,” and it is a technology that allows two devices to communicate with each other when they are close together.

NFC cards can be used for a variety of purposes, such as making payments, storing tickets or loyalty cards, and sharing data.

How Do NFC Cards Work?

NFC cards are a form of contactless payment that uses radio-frequency identification (RFID) technology to communicate with NFC-enabled devices.

These cards can be used to make payments at NFC-enabled terminals, as well as to store and share data.

NFC cards are similar to RFID tags, which are used to store and share data. However, NFC cards are embedded with a microchip that stores data and requires security information, making them more secure than RFID tags.

NFC cards are widely used in Japan and South Korea and are beginning to gain popularity in other countries, such as the United States.

The Benefits of NFC Cards

Near Field Communication (NFC) cards are plastic cards that contain an embedded NFC chip. This chip enables the card to be read by an NFC-enabled device, such as a smartphone, without the need for physical contact.

NFC cards offer a number of benefits over traditional credit and debit cards. For starters, they are much more difficult to lose or misplace. They also provide an extra layer of security, as the NFC chip cannot be duplicated like a traditional magnetic stripe.

In addition, NFC cards offer a number of unique features and benefits that are not available with traditional credit and debit cards.

For example, some NFC cards can be programmed to automatically enter loyalty or rewards programs when used at certain stores. Others can be used to make mobile payments via apps such as Google Pay or Apple Pay.

Overall, NFC cards offer a number of advantages over traditional credit and debit cards. If you are looking for a more secure and convenient way to pay for goods and services, an NFC card may be right for you.

The Drawbacks of NFC Cards

While NFC cards are a very convenient way to make payments, there are some potential drawbacks associated with them.

One of the biggest concerns is that NFC cards are much easier to lose than traditional credit or debit cards. If you lose your NFC card, anyone who finds it could use it to make unauthorized purchases.

Another concern is that NFC cards can be read by anyone with an NFC-enabled device, even if they are not in your possession.

This means that your personal information, such as your name and account number, could be accessed by someone other than you.

Lastly, if your NFC card is stolen or otherwise compromised, you may be liable for any unauthorized charges made against it.

For this reason, it is important to keep track of your NFC card and to report any suspicious activity associated with it immediately to your financial institution.

Yes, NFC cards are legal. There is no law against using or possessing an NFC card. However, there are some laws that may apply to NFC cards if they are used for illegal purposes.

NFC (Near Field Communication) technology is a short-range wireless connectivity standard that allows two devices to exchange data. NFC can be used to share small amounts of data between two devices, such as contactless payments through mobile wallets like Apple Pay and Android Pay.

NFC cards are credit card-sized devices that contain an NFC chip that can store and exchange data with other NFC-enabled devices.

NFC cards are commonly used for contactless payments, but they can also be used for other purposes such as public transport ticketing and event ticketing.

While NFC cards are very convenient, there are some security concerns that you should be aware of. It is important to keep your NFC card safe and secure, just like you would with any other credit or debit card.

Here are some tips for keeping your NFC card secure:

NFC cards are becoming increasingly popular, but there is still some confusion about their legality. In general, NFC cards are legal as long as they are properly registered with the correct authorities.

However, there are a few exceptions to this rule, so it is always best to check with your local laws before using NFC cards.

Use Zapped Digital and NFC Business Cards to Supercharge Your Marketing

As small businesses increasingly move away from traditional paper business cards, zapped NFC cards are becoming an attractive option for marketing. Although they may seem like a gimmick at first, zapped NFC cards offer a number of advantages over their digital and paper counterparts.

For one, zapped NFC cards are far more interactive than paper business cards. By including features such as QR codes and links to social media profiles, zapped NFC cards give recipients a way to connect with your brand even after they’ve left your initial meeting.

What’s more, zapped NFC cards are environmentally friendly. Unlike paper business cards, which often end up in the trash, zapped NFC cards can be reused and recycled. This not only saves you money in the long run, but also helps reduce your company’s carbon footprint.

Signup at Zapped.to for your free digital business cards.

Are you tired of using boring, outdated business cards to market your business? Are you looking for a modern, effective way to showcase your brand and make a lasting impression on potential clients and partners? Look no further than Zapped Digital Business Cards!

With Zapped, you can easily create and customize stunning digital business cards that showcase your brand, contact information, and social media profiles. These cards are not only more convenient and eco-friendly than traditional business cards, but they also allow you to add multimedia elements like videos and animations to make your card stand out.

Upgrade your marketing game with Zapped Digital Business Cards. Try it out today and see the difference it can make for your business!

Are you tired of being the only one at networking events without a fancy schmancy business card? Are you sick of fumbling around for a pen to exchange contact information, only to have it written on a crumpled piece of paper that gets lost in the depths of your purse or wallet? Well, say goodbye to those awkward moments and hello to the future of networking with Zapped NFC Business Cards!

With Zapped, you’ll be the envy of the room with a sleek, modern business card that utilizes NFC (near field communication) technology. Simply tap your card to someone else’s phone, and boom – your contact information is transferred instantly! No more scribbling or typing. It’s like magic, but even cooler because it’s technology.

But wait, there’s more! Zapped’s platform allows you to customize your NFC business card with videos, animations, and social media links, so you can really show off your brand. Plus, you can easily track who has viewed your card, so you know who to follow up with.

Don’t get left behind in the age of technology – upgrade to Zapped NFC Business Cards today! Trust us, your future self will thank you.

Are you tired of traditional marketing methods that just don’t cut it anymore? Are you ready to level up and take your business to the next level with some seriously cool technology? Look no further than Zapped NFC tags!

With Zapped, you can stick these tiny tags anywhere – on the back of your phone, on the entrance to your storefront, on tables at events – and instantly promote your business with a digital business card that can be accessed with a simple tap. How cool is that?

But it’s not just about the convenience of being able to tap and access your information. Zapped’s platform allows you to fully customize your digital business card with videos, animations, and social media links, so you can really show off your brand and stand out from the competition.

And the best part? You can track who has viewed your card and see the success of your marketing efforts in real time. No more guessing or wasting money on ineffective marketing tactics.

Upgrade to Zapped NFC tags and revolutionize the way you promote your business. Try it out today and see the difference it can make!

Visit Zapped.to/shop/product/nfc-tag/ for your NFC tag. 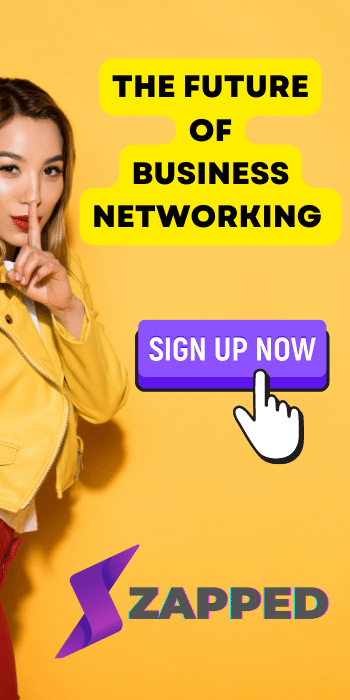 How to Promote Your Brand with Smart Digital Card?

What’s the Difference Between a View and A Click on Your Linktree?